Back in the 16th century, the Dutch had a bright idea- private companies would use mercenary soldiers to attack foreign lands, reaping huge profits, and relieving the state of the expense of maintaining an army or navy in those foreign lands. Eventually, the thieving, brutality, financial shenanigans and just plain waste made this whole scheme a big headache for the Dutch, and they dissolved their East India company in 1795.

So today we have American companies promising to rule Iraq with mercenary soldiers, and produce windfall profits that will relieve the American taxpayers of the cost of maintaining an army or navy. Well, not actually, of course- why give away the cow when the taxpayer can be forced to pay more every year for the milk?

But the general idea is the same and it will come to the same bad end. The only real question is how long it will take.
Posted by serial catowner at 1:33 PM No comments: 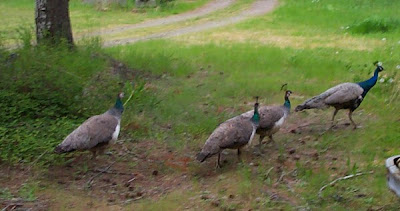 These guys came through the yard the other day, and if you knew where I lived you'd find it even more amazing than you do. I don't know if I hope they got home, or if they got where they were going- well, actually, I'm hoping those two places are the same.
Posted by serial catowner at 4:53 PM No comments:

That Was The Week That Wasn't

I knew a guy who would laugh inwardly as you parlayed an initial misunderstanding into outright verbal stupidity. In much the same way, Boomer Americans drew the wrong conclusions from what they saw, and now stand agog at what has transpired.

In reality of course, most shares are non-voting, and shares seldom constitute the major debt of a corporation. The overwhelming impact of public trading of stock market shares has been to allow a small group of inside investors to use other people's money to create a corporation that can borrow even more money, for the purpose of making, not stuff, but money.

Thus, it should come as no surprise that General Motors makes most of their money by lending money. General Motors was formed as a pool to buy parts from car part manufacturers, and DuPont took control as soon as it became evident that General Motors would be a major buyer of automotive paints, and a major source of revenue from loans granted to buy cars. Lending money to buy homes is exactly what GM does, because they don't make cars, they make money.

IOW, only an idiot steals from a bank by robbing it- the smart guys steal from the bank by owning it.
Posted by serial catowner at 11:10 AM No comments:

The Ineluctable Division of Labor

In health care, what formerly was a 'medical practice', i.e., a doctor seeing patients, keeping patient records, prescribing, and treating, has become a money-making machine overseen by a doctor.

Every part of the process has been parcelled out to a specialist, and in many cases these 'specialists', far from performing any useful (to the patient) task, simply act as gatekeepers and attendant priests of the temple. The receptionist grandly positions you in the waiting room, and in the assembly line that keeps the 'nurse' and the 'doctor' busy. The 'nurse' ostentatiously takes your temperature and blood pressure, as though something new would be revealed and then reveals their total ignorance of who you are or why you're there by asking you for your past medical history, and misspelling the names of the drugs you're taking.

The doctor is the most likely of this motley crew to actually be who they say they are, or have some idea of what's going on. But don't bet on it.

It's simply not about medicine any more. It starts with the doctor's desire to pay for med school and have a good job, and quickly becomes a small industry, a way to make money that masquerades as a doctor's office. And we wonder why we can't afford it.
Posted by serial catowner at 10:17 AM No comments:

An online dictionary defines "assarts" as the clearing of forest land and digging out of roots of forest shrubs. A more useful definition expands the term to include, for the purposes of our understanding, the processes by which the royal forests were diminished or changed in function.

We may, for example, consider the creation of enclosures and parks, the harvesting of timber, the pasturage of livestock, the afforestation resulting when the domain of the royal forest was withdrawn from privately owned land, encroachments, or what often resulted from longstanding encroachments, the sale to an adjacent landowner or village of a right to pasturage, a right to enclose, or a right to cut timber or withies.

In medieval Englande, forests, understood as actual forests with trees and shady spaces, as opposed to the legal establishment known as the royal forest- forests, then, I say, were essential and almost central. They provided timber, coppicing, forage, fuel, meat for the poachers and nobles, nuts for the nut bread that villagers ate in lieu of wheaten or oat bread, chemicals for tanning leather- they were at the center of an economy that burned wood, wore leather, built of stone and wood, and often starved in the winter.

The pressure to assart the royal forests, then, was tremendous, the process started early, and by the thirteenth century the royal forests were in full ebb, probably rivaled in extent by the emparking then under way by local landowners and lords, and physically destroyed by the new and different uses of assartification.

Thus, subsequent efforts by English monarchs to reclaim the assarted land- to be the subject of a future post- were, probably predictably, controversial.
Posted by serial catowner at 9:03 AM No comments:

This is all so totally retro. The Bush Years have seen the final flowering of the mid-50s, when Bush attained the mental age he now enjoys- about that of a nine-year-old.

If you want to work for the Bushies, just throw out every thing you've learned in the past 50 years. Evolution, contraception, tectonic plates, the lessons of Suez and Vietnam- banish those thoughts from your mind. The Commander Guy, when he's not playing with toy soldiers, wants to go to Mars!

Will it work? Hard to tell. Eisenhower worked for peace in the world so we would be free to spend trillions building our suburban dreamland, creating full employment and apparently endless prosperity for 150 million of us over a period of 50 years. That's a tough act to follow.

Especially (cough cough) with gas at three bucks a gallon and heading for four.
Posted by serial catowner at 8:45 AM No comments: 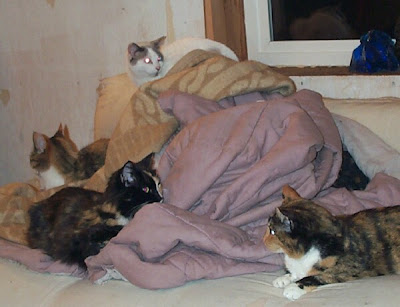 Posted by serial catowner at 11:14 AM No comments:

(The following, to be expanded in future posts, is intended as a sort of fill or bounce light on a major and bulky process of history. Hardly intended to be comprehensive, in fact, it cannot be guaranteed that no major error of fact has occurred, I still believe the reader may find it interesting. If they are so inclined.)

The course of the Norman victory in England is so simple that it should be known by
every halfway interested student. William conquered at Hastings, killing Harold, and in
the two subsequent years made two swings through the country, defeating resistance and
establishing blockhouses. About two years later a final campaign of genocide was made
in the north, drawing international condemnation for cruelty, and settling survivors in
strategic hamlets.

The elements of Norman victory were heavy cavalry and castles. Mobile cavalry units
were not new to England; Alfred had set up such a system. The castles, on the other hand
were aggressively built and used in a manner new to the English. However, there are
suspicions that the relative ease of the Norman takeover was possibly facilitated by cash
(or the feudal equivalent) as there is a noticeable lack of outraged complaint from the
Anglo-Saxon ruling class that was displaced. In short, while the Normans undoubtedly
were exceptionally competent gangsters, they very probably were assisted by a fairly large compradore class.

Aside from the castle building, and the complete replacement of the baronial class,
William introduced little real innovation to England. However, he shrewdly enlarged
upon the existing Forest Law, extending it in law and on the ground in ways not
previously seen. His rapacity was matched by his noble underlings to the extent that, at
one point, a third of England lay under Forest Law, this divided roughly half-and-half
among the Crown and the nobles.

Forest Law was essentially law that protected deer, extended over commons lands and
private lands from the original Crown lands it developed in. The private landowner, or
the commons, continued to own the land, but the deer could travel and feed at will upon
it, essentially acting as tax collectors who collected food deer eat and delivered
themselves as venison to the crown.

Of course, the sudden and widespread imposition of such a tax could only be expected to
inspire the bitterest opposition. Nor, in fact, was it an especially effective form of
taxation, although it did serve as an effective mechanism for William and his successors
to collect revenue where none had been collected before. For these and other reasons the
Forest Law in the 13th century and after receded almost as quickly as it had spread, and
soon even areas of forest owned by the Crown were being afforested, which does not
mean the actual forest was cut down, but that the Forest Law was withdrawn from the
land.
Posted by serial catowner at 2:41 PM No comments:

Posted by serial catowner at 2:34 PM No comments:

Posted by serial catowner at 8:04 AM No comments: