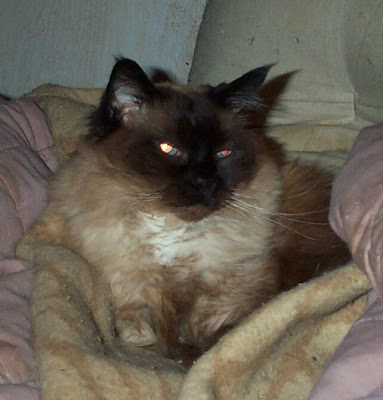 Posted by serial catowner at 5:57 AM No comments:

What Goes On Here?

Supposedly the President is a Very Important Person, continually pressed by the kind of choices and events that just can't wait. But now, suddenly, everything is on hold. We're just going to drift until the next President is in office.

That is baloney, and if it works, it will be a miracle. The Congress needs to accept its responsibility, impeach Bush and Cheney, and put somebody in office who can do the work.

And if that doesn't happen, it won't be the fault of our Constitution, or of the voters. It will be the failure of the best management team money can buy. Of course, we've already seen how well that scheme works, on Wall Street, in arranged marriages, or in managing our public universities.

We can't change everything. But at least we can stop pretending the President is some kind of essential person, now that we're so obviously hoping he's not.
Posted by serial catowner at 8:57 AM No comments:

The original business of criminal gangs was stealing- still an entry-level raison d'etre. The Roman latifundia in Sicily, through labor-racketeering, became the birthplace of the Mafia. As the world economy matured criminal gangs coalesced around every center of money or power.

In the 20th Century, oil was the center of power. The gang structure was surprisingly similar in all the oil-exporting countries- a local oligarchy in league with world oil-buyers, using a portion of the proceeds to subsidize the workers who pumped the oil, the workers being used when necessary as Brownshirts in defense of the regime. The PRI in Mexico is a prototype example and the fall of the PRI with the maturation of the Mexican economy a lesson in how such gangs fall.

Has This Ever Happened Before?

Don Siegelman, former governor of Alabama, is in prison on trumped-up charges brought in an obvious political prosecution by Republicans- so obvious that CBS has reported the case nationally.

But not in Alabama, where the CBS broadcast stream was blacked out for the segment on Siegelman by the owner of the local affiliate- a Republican.

I thought I'd seen just about everything, but this is like watching a movie about a dictatorship- and realizing it's not a movie, it's not a dream, you can't wake up- because you're already awake.

Too bad the same can't be said for the people around you.
Posted by serial catowner at 10:12 AM No comments:

Posted by serial catowner at 8:47 AM 2 comments:

Nick Davies has written a book called The Flat Earth News. He says he chose that title because "for hundreds of years everyone knew the Earth was flat".

The irony here would be that people knew the Earth was round two thousand years before Davies thinks they did.

Yes, there were "hundreds of years" when people thought the Earth was flat - but that was in XCXLM B.C.- a loooong time ago.
Posted by serial catowner at 5:34 AM No comments:

We Are So Screwed

If you want to know how screwed we are, consider this- for about 20 years Europeans have been making modern cars that get around 60 mpg. The American auto industry has hid behind "safety regulations".

Now there is vague talk of maybe getting 40 mpg with American cars, or even (be still, my heart!) raising the CAFE to 30 mpg. Well, while we're doing that, the Europeans will be going for 70 or 80 or 90 mpg.

Americans are saying, well, maybe automatic guideway systems in the road will substitute for mass transit, because the cars will move ever so much faster.

But if there's any rational place for cars in the modern economy, the Europeans will be cleaning our clock with gas mileage double ours per capita. And it's not like they lose this advantage by the amount our population exceeds theirs- on the contrary, if we have more people, we have more marginal expense.

If we can't wake up and smell the coffee, it's not going to be pretty.
Posted by serial catowner at 6:01 PM 1 comment: 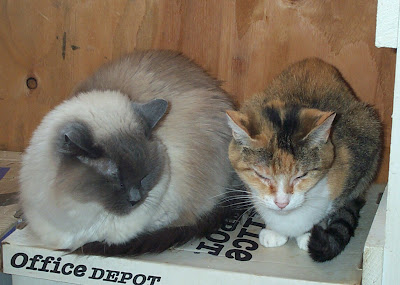 Posted by serial catowner at 1:39 PM No comments:

Jen, at Little Country Lost, has joggled my morning by tagging me for a book post, the rules being to open the nearest book to page 123, read the first five lines, and post the next three lines. Fortunately, doing so does not make me blush and wish I had better taste, as Winston Churchill's World Crisis comes readily to hand.

"The entry of Great Britain into war with the most powerful military Empire which has ever existed was strategically impressive. Her large fleets vanished into the mists at one end of the island,. Her small Army hurried out of the country at the other. By this double gesture she might seem...to divest herself of all her means of defence....Yet these two movements, dictated by the truest strategy, secured at once our own safety and the salvation of our Allies. The Grand Fleet gained the station whence the control of the seas could be irresistibly asserted. The Regular Army reached in the nick of time the vital post on the flank of the French line. Had all our action been upon this level, we should today [1927] be living in an easier world."

As we contemplate our 200,000 soldiers in Iraq, and our casualties of 60,000, perhaps we should occasionally remember that in the first shock of the Great War, three millions of troops were hurled upon one another, and in a single day 60,000 men were lost by just one of the armies. Yet never during that war did the British resort to torture. There's a lesson in there someplace.

And now I'm hoping that Frank, at Orphan Road will accept the tag and find some interesting book to hand.
Posted by serial catowner at 5:26 AM No comments:

I always imagined the strikethrough function would be impossibly complex cool and easy to use. And so it is. The operative character is 's' and '/s' as it turns out- little enough to memorize. However, Blogger does not support strikethrough in comments, blighting all hope of snappy repartee.
Posted by serial catowner at 11:22 AM 2 comments:

Econ 101- How To Make Problems

When someone gets money and they can't invest it wisely, you have a problem. This could be a sheikdom with oil revenues, a guy who wins a disability lawsuit and gets paid a lump sum, peasants growing coca, whatever- concentrations of money that can't be used wisely cause problems, and even those that are used wisely create problems for somebody else.

For example, the war in Iraq has allowed oil traders to drink our financial blood like vampires, and our drug prohibition policies fund the insurgent war in Afghanistan.

The creation of problems is inextricably linked with the existence of money, and the amelioration of the problems will only be possible when the linkage is acknowledged and somewhat understood.
Posted by serial catowner at 9:36 AM No comments: 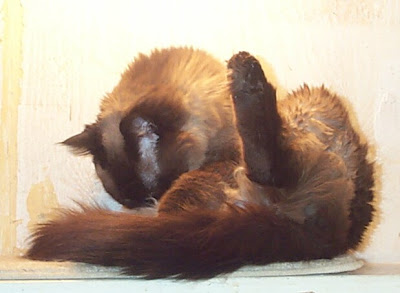 Posted by serial catowner at 12:00 PM No comments: 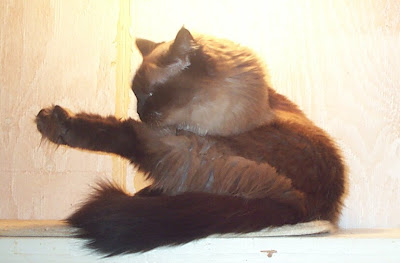 Posted by serial catowner at 11:57 AM No comments: 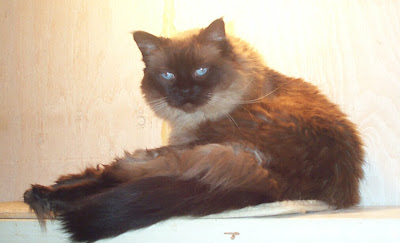 Posted by serial catowner at 11:48 AM No comments: 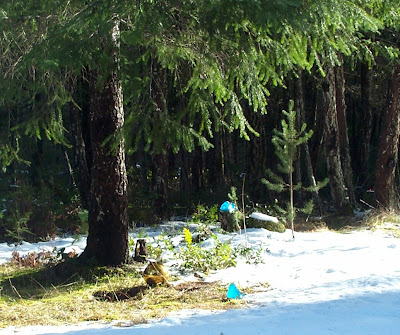 Posted by serial catowner at 5:03 PM No comments:

"Woman's Safe Haven From Storms Fails Her"- so the headline read. What, I wondered- was her tornado cellar torn from the ground? Did the twister take the concrete pillbox she'd built to hide in?

No- the tin mobile home she had parked in a fold in the ground on her property had been blown away.

It seems that, over the years, the family had noticed that most tornadoes jumped over that fold in the ground. Just the fact that you see that many tornadoes should suggest to you the idea of some serious shelter. Apparently, it did not.

Her body was found 30 feet from the former home. And somehow, the idea of putting a cheap manufactured home in a location you have seen several tornadoes leap over seems so typically American I could not let it pass without comment.
Posted by serial catowner at 4:47 PM No comments:

For the first time in our national history, we need a Congress that can run the government.

Let me explain. For our first 125 years, the US government financed itself with the lands taken from the Native Americans.. The railroads were built with land-grant loans, and the loans were repaid with free transport for the government during WW I. Then came the oil bonanza followed by our victory in WW II that left us as the only economy still able to stand. It's been grand, but the party is over.

For all of those years it did not matter if the Congress was dysfunctional (and it quite obviously was), but now it matters.

We can no longer trust any president with the powers to 'save' us. We need to develop the capacity of self-government, and we need to do it fast. We can't afford to emulate the French in trying out five different republics before we get it right.

Fortunately, the Congress has the powers, and they have the skills. All they need now is the determination. Maybe another 'journalistic coup' will put McCain in office and inspire the Congress to act.
Posted by serial catowner at 10:52 AM No comments:

This is not that hard.

You just refuse to issue a refund, or allow the taxpayer to itemize deductions, until the taxpayer has furnished proof of insurance. This simple approach enrolls 95% of us, while allowing the truly destitute to escape imprisonment.

Like I said, not that hard.
Posted by serial catowner at 10:42 AM No comments:

By far, the longest war America has fought has been the war on cannabis.

But the anti-pot forces are no closer to "winning" their war than ever, because pot is not the enemy- their enemy is freedom, and their choice of marijuana as an excuse to attack freedom has paradoxically allied the force of the black market with the seekers of freedom.

Perhaps, in the general gotterdamerung of the end of oil, seekers of freedom will flee America. Alternately, we might realize what a costly and pointless fiasco this all has been. As with so many other things in life, it all gets back to something your mother said- "Don't you have anything better to do with your time?"
Posted by serial catowner at 9:01 AM No comments: