It's not immediately apparent how big a railroad is. Try to pick up a piece of rail and you start to get the picture. But the real bigness of the railroad lies in the right of way and the structures, much of it critically important to transport by rail, and won hardly over a century of struggle.

Taken all together, it's quite an investment- in fact, it's too much investment to ever pay a competitive return. And, with a few exceptions, this has been the case for the entire history of railroading. Each road built on the bankrupt wreck of two or three or even sometimes a dozen failed progenitors, and each in turn destined to fail.

The simple fact is that the investment is too large to pay over 5% on investment in a nation where 6% is the ante. Other nations have dealt with this by constructing state railways, by constructing the railway and leasing it to a private company to run, or by nationalizing formerly private roads.

It would take some mighty fancy economics to determine the ins-and-outs of societal and railroad finance. With practice this science will improve , but in the meantime we'll experiment and learn from others. At least we've learned that healthy railroads, competing in the capital markets for private investment, with dividends over 5%, ain't gonna happen.

They're just too darn big.
Posted by serial catowner at 7:41 AM No comments:

The Core of Transit

Judging from the local transit blogs, Seattle has developed a new generation of transit fans. This mentally fresh generation thinks all ideas are created equal and deserve to be examined on their merits. As for paying for transit, however, the thinking is quite the reverse, and here they try to milk some scheme from existing taxes and revenues.

Rail transit, however, is and will be a socialist enterprise. There are a number of reasons for this, to be explored in a future post, but the bottom line is plain- no business as usual.

Seen as a social asset, transit looks much different from how it appears as a collection of kludges and wild guesses by technocrats with little or no actual historical knowledge. And that's a good thing.
Posted by serial catowner at 7:54 AM No comments:

Seattle's Mayor McGinn must feel as though he's died and gone to heaven. Where else could you find an entire city of such rubes?

Last week McGinn announced he had a plan to create 60,000 jobs in Seattle. In the process, he revealed the real reason for the press conference- he's learned that people are concerned, most of all, about jobs.

The Seattle papers, in a kindly manner, simply ignored the announcement. Pointing our how implausible it was would have been cruel.

And that's ok with McGinn- he now has his "plan", and his trusty supporters can be relied on to point this out at any suitable occasion.

For a demagogue, it doesn't get much better.
Posted by serial catowner at 7:05 AM No comments: 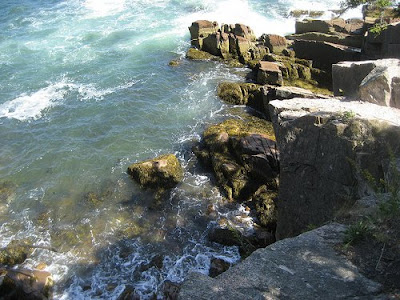 The ideal blog post, to my way of thinking, is the beginning of a conversation, to be continued in 'comments'. There are, of course, other ideals, but in this case I'm referring to a non-expert post that can't justify long-windedness, but hopes to stimulate an enlarging discussion.

In this regard, a little controversy becomes a good thing, encouraging readers who choose to disagree- that is, to say, if disagreement is permissable in your audience. The audience that cannot civilly disagree will react violently to disagreement, and the ensuing discussion may be less than enlightening.

Much like a short paper for high school, a post should have an idea that is asserted, developed, and summarized in somewhat less than 300 words. Then, if you combine your wait for eager readers with contemplation of the seaside (photo courtesy Matt Yglesias), your soul will find peace.
Posted by serial catowner at 1:57 PM No comments: