You'd Wake Us For That? 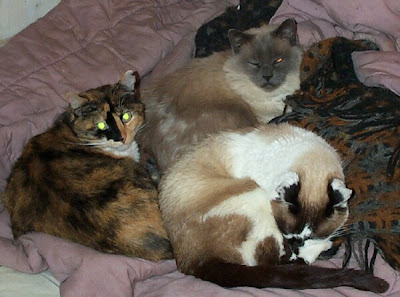 Posted by serial catowner at 3:05 PM No comments:

It's Not The Death Of Irony

It's death by irony.

The idea that a firm named Custer Battles would protect us in Iraq- that would be one of your warning signs.
Posted by serial catowner at 9:59 AM No comments:

Posted by serial catowner at 10:12 AM No comments:

Every safety regulation is touted as a way to make you safer. But they are much more than that.

Safety regulations limit liability and restrict who can make what. The person who is supposedly being protected is also, in actuality, being forced to do things in certain ways, and assume certain costs.

The clearest illustration of this is the safety regulation of American automobiles, which effectively force us to buy cars that get half the gas mileage we could get from other cars we're not allowed to buy. That is to say, the regulations force us to buy from the oil companies gasoline we perhaps would not buy if there really was a 'free market'.

And the person actually affected by the 'safety' part of the regulation is at the kiddy table.

With a global warming crunch and the peak oil crunch coming at about the same time, we are looking at some real problems for suburbia in America. Allowing the free importation and sale of smaller cars could really ease the pain here It's one thing we could do right now- if we wanted to.
Posted by serial catowner at 9:08 AM No comments:

Sometimes you just have to laugh

So, in an effort to arm the 'good guys' in Iraq, the Americans bought weapons in Bosnia (lots of weapons there) and arranged to have them shipped to Iraq on airplanes- airplanes owned by a well-known international gun smuggler and arms merchant.

And guess what- the weapons never made it to Iraq- or at least, the 'good guys' say they never got them.

Which might explain why the 'good guys' turned to the Italian mafia to help them buy black-market AK-47s About 200,000 of them.

At this point it's easy to do a cocktail napkin calculation that there must be about a million military weapons adrift in Iraq today.

Fort Apache was never like this.
Posted by serial catowner at 9:52 AM No comments: 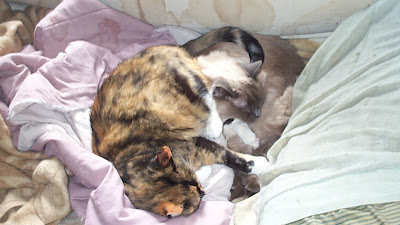 Posted by serial catowner at 10:29 AM No comments:

Sure, Condi will still be Secretary of State. But the Bush gang don't need no stinkin' State Department. The simple artifice of declaring a foreign army to be a 'terrorist organization' allows them to bypass diplomacy, international law, and, of course, the US Congress.

It's so simple, you wonder why nobody ever thought of that before......
Posted by serial catowner at 10:43 AM No comments: 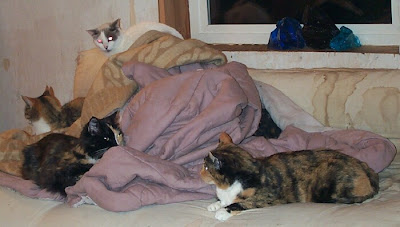 Posted by serial catowner at 11:05 AM No comments:

The Truth About NCLB

Recently I did an internet search for info on cranberry juice and urinary tract infections. After about ten minutes I had references to impeccable studies that reached statistically significant results. In the 'good old days' it would have taken me that long to walk from the entrance of the library to the card catalogue.

And this is the truth about NCLB- testing the ability to add and subtract or spell correctly has nothing to do with education. Those skills are what L. Francis Herreshoff once referred to as cement overshoes on a student of ballet.

Whatever the real reasons for NCLB may be- gentlemen, you may start your speculation-they do not include a real education, and whatever the results will be, they will not include a real education. Carried out in any significant degree, the real results are likely to resemble the education received by the "greatest generation', which left them a prey of demagogues, pathologically pedantic about the ability to add and subtract, and crippled by arthritis in hands that their teachers whacked with rulers.

That's no path to the future- it's not even a path to the present.
Posted by serial catowner at 7:48 AM No comments:

Glad it's not terrorism?

Some people are glad the recent bridge collapse wasn't terrorism.

You know, like, well, that's certainly a relief that the cause was the poor maintenance and chronic overuse that affects tens of thousands of public structures across the US.

Yup, it's lucky we have those terrorists to be scared of- otherwise, we might have to start fixing stuff around here.
Posted by serial catowner at 11:06 AM No comments:

To Hell With Upward Mobility

To hell with upward mobility. What is needed is a decent life for the downwardly mobile.

Make it possible to survive on a course of downward mobility and you unlock the real talents, of art and social service and scholarship, that are otherwise straightjacketed by the desperate need to find the next meal.

Rewarding the upwardly mobile has given us a nation glittering with toys but poorer in real terms every year. It's just common sense to help the poor- it won't be so very long before you are among them.
Posted by serial catowner at 10:14 AM No comments:

A Title On This Post Would Generate Weird Hits 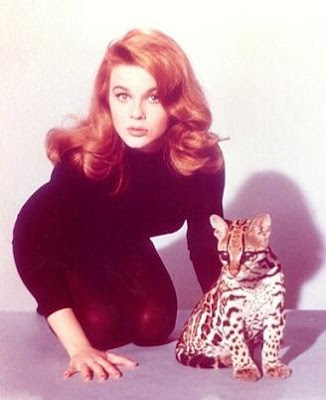 Posted by serial catowner at 11:14 AM No comments:

Wow, so millions of people stood in line to buy Harry Potter's latest, read the book in one sitting over the next two days, said all there was to say about the book in the next six hours and.....

That was that. It's over.

Will wonders never cease? Apparently this one did.
Posted by serial catowner at 11:08 AM No comments:

Posted by serial catowner at 3:11 PM No comments:

Through A Glass Dimly

Americans have never understood Mao. Maybe the closest we've come was the statement that Mao's forces were "agrarian reformers". Yes, they were, but not in the sense that was meant by that statement.

Mao believed that to put China back together, it would be necessary to harness the power of the peasantry, and that the only way that could be done was to break the power of the gangster landlord and warlord classes, and to break the hold on the people of superstition and religion. Nothing in there about democracy.

Meanwhile, Americans spun for themselves the pleasant fantasy that democracy would inevitably follow the development of a stable middle class. This made it possible for us to support dictators around the world on the assumption that they would eventually create a prosperity that would lead to democracy.

Mao understood the possibility that an industrialized China could be a dictatorship by the factory managers and state apparatchik That's why he proclaimed the Cultural Revolution- which failed. Hey presto, dictatorship.

It should surprise nobody that China has assumed essentially the form which it had for about 2000 years. The anomaly was the Revolution of Sun Yat Sen and the pathologies developed between 1850 and 1950. Mao's restoration of things as they had been incorporated some elements of the coming century and arguably did no worse than contemporaries at sketching the ways to meet the challenges of the future.

The future may include democracy in China. That, however, was not what Mao was about.
Posted by serial catowner at 10:57 AM 1 comment:

Back in about 1963 my Uncle Dave, god rest his soul, gave me a little book he had written for an aerospace firm in Houston. I loved the title- Where do we go from the moon?

Now Bush, a cool 45 years later, thinks he has the answer- why, Mars, of course!

There are a few little details to be worked out, like the fact that we aren't actually on the moon, but Bush will be all over that- when he isn't staring at his lava lamp, or riding his bicycle.
Posted by serial catowner at 12:11 PM No comments: 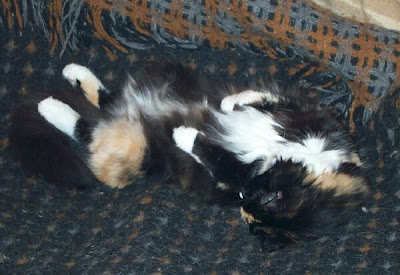 Posted by serial catowner at 10:26 AM No comments: