Posted by serial catowner at 4:15 PM No comments:

In reality, as you can see on comment threads, or in remarks from Republican legislators or cable news, there's one way to look at a problem, and then there are people who are totally insane. Run some actual public policy from Europe up the flagpole around here, and see what kind of salutes you get. Like I said, totally insane.

And this will be about as easy to change as shariah law or the belief that the sun goes around the earth. In Germany 70 years ago it took total defeat and destruction to bring them down a peg and restore sanity.

Could it happen here? Be afraid, very afraid.
Posted by serial catowner at 1:51 PM No comments:

Back in 1970 I voted against the proposed subway, because it was 'a conspiracy to benefit the rich' etc etc. Of course, in those days the Highway Department had quite literally and illegally conspired against the citizens to build freeways, city departments and unions conspired to give the shoreline away to businessmen, and, in violation of the Shoreline Management Act, Roanoke Reef was under construction with permits illegally issued by the Building Department.

As the years passed and government was cleaned up, conspiracy theories became more a general misguided do-goodism, occasionally whipped to a froth by demagogues like John Fox. The Sierra Club opposed rail transit because "it would encourage sprawl", and citizens voted a height limit on buildings for reasons I never understood.

Eventually the reaction to non-existent conspiracies reached a nadir when Seattle hipsters were led around by the ring in their nose by the unholy trinity of John Fox, a used car dealer, and a suburban chain of free 'alternate' newspapers opposing the Seattle Commons proposal. Every nattering nabob of negativity climbed on board to defeat the evil proposal to build a park, but the only Seattle institution saved by their opposition was the civic fear of conspiracies.

That this civic fear is alive and well was illustrated recently by several blogposts suggesting Gregoire had wickedly promised improved bus service and was now reneging, and in the most recent form, by a post at Seattle Transit Blog suggesting that a central waterfront park in Seattle could be too big.

In the case of Gregoire and the buses, let's remember that Ron Sims promised Gregoire that King County would supply bus transit for commuters to downtown, and, depending on that promise, Gregoire announced a downscaled effort by the state to provide capacity for traffic bypassing downtown. Now Sims is off to the other Washington, to spread his pro-bus-anti-rail agenda, and Gregoire is left to deal with Frank Chopp and his merry band.

It hardly seems any more realistic to imagine a waterfront park that is "too large" in an area that even a wheezing asthmatic can traverse on foot in about three minutes. But this is hardly the last dark foreboding that will emerge in the Seattle Process, and commenting on them often bears more resemblance to a game of whack-a-mole than reasoned discourse. Informed observers will have noted that John Fox is back, now fighting increased density around rail transit stations, as part of his tireless but ineffective demagoguery for low-income housing.

Enough already! The next time you feel like they're all out to get you, grab some old issues of the Helix and find out what real conspiracies look like. Conspiracies? We had 'em. But now, not so much.

Posted by serial catowner at 10:31 AM No comments: 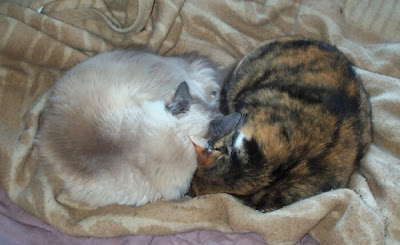 Posted by serial catowner at 11:36 AM No comments:

Obama has ascended to dizzying heights- perhaps too dizzying for a Democrat. Despite a clear mandate, he's not providing leadership for a Democratic Congress to pass needed legislation.

According to the AARP, two-thirds of Americans want universal health care- and they want it now. Other polling has shown 70-80% for the position of legalizing marijuana.

If Obama continues to court Republicans, he will be sadly out of step with the majority of Americans- at a time when the "leadership" on Wall Street and in Washington DC has proven itself bankrupt. Unlike movies, history does not always have happy endings.
Posted by serial catowner at 4:40 AM No comments:

As regular as a clock, one of the old has-beens at the Seattle Times will suggest that bicyclists should "help out" by asking to be taxed, again, for roads and parks they've already paid for.

How about realizing that bicyclists are already helping by using a vehicle that will never wear out a city street, a form of fuel that doesn't pollute or make gas prices higher by increasing demand, and a machine that doesn't drip oil on the streets to poison our waterways.

And, in spite of the fact that cyclists have already paid for the roads (in your county tax statement, in case you didn't know) and are legally entitled to half a lane, they are subject to bullying by drivers and frequently hit by two-ton vehicles. Then, when you finally reach your destination, well, good luck trying to find a parking spot for your bike. Yes, it's easy enough to provide free parking for cars and trucks, but a major challenge to fit in a few bike racks.

And it's not like you would actually get anything for your license fee- in fact, the chances are pretty good you'd actually have to pay more taxes to make up the shortfall at the licensing office.

As Obama said, we now must put aside childish things- and that would include the idea that bicycles are not a serious solution to some serious problems we need to solve.
Posted by serial catowner at 4:57 PM No comments: