Dear God, let this not be true. Give McCain the courage of his convictions...oh, right. This is 'Flip-flop McCain' we're talking about.

Well, a guy can dream...
Posted by serial catowner at 2:32 PM No comments:

Let Me Just Say This About That....

Bypassing Collins, Snow, Dole, or Condoleeza Rice, McCain has chosen a comely dame who will sit "at the foot of the master", a direct quote from the McCain campaign. Editorial cartoonists wept when Dan Quayle passed from the scene, but in this case the humor has entirely outstripped the ability to make fun.

Let's compare this with John Kennedy's choice of Lyndon Johnson, a person Kennedy did not particularly like, but who went on to win enactment of Medicare, the Civil Rights Act, and Head Start.

McCain may have, with one stroke, made it impossible for the right-wing media and the combined millionaires of America to buy his election. Yup, he's a maverick, all right. And he just stuck a horn deep in the cowboy's horse. Git along, little dogie!
Posted by serial catowner at 11:39 AM No comments:

Posted by serial catowner at 4:37 PM No comments:

Quietly, last week, the US attached itself to the central tarbaby of western civilization- Poland. For centuries Poland has been at the epicenter of disaster in foreign affairs. Traditionally incapable of governing itself, the Poles have repeatedly invited invasions and sparked wars.

As if being in Afghanistan weren't enough! Our money, supplied lavishly to terrorists and warlords in Afghanistan during the 80s, paid to destroy the elements (educated people, women, schools, clinics) that formerly made Afghanistan the most advanced society in the region. Now we're supposedly there until we make it all better. Like that's going to happen.

All that's needed now to complete the trilogy of doom is an open-ended commitment to some nation in the Balkans- right, been there, done that, got the permanent base in Macedonia and the drug-smuggling white slavers of Albania on our side. With friends like these, who needs enemies?
Posted by serial catowner at 11:51 AM No comments:

You Don't Need To Read Marx...

...thank God, to see that the Chinese revolution of 1949 was not communist. One clue would be the strong lead exercised by the peasant class, not by the urban proletariat.

While the Chinese merchants have at all times been strongly international in trade relations, the Chinese empire, by the 13th century, had decided against outward expansion. The Chinese economy looked inwards, to the Grand Canal, which carried surplus rice in a good year to Beijing, and in a bad year distributed to the provinces from the reserves in Beijing.

The revolution won, but it was the revolution of 1911 that won- the revolution of modernization and the adaptation of the Chinese state to the mechanisms of international trade. Certainly since 1970 the rulers of China have been no more 'communist' than you or I- as convenient as it may have been to them, and the scaremongers of American society, to preserve the fiction.
Posted by serial catowner at 6:47 AM No comments:

In order to 'win' the drug wars, we need to pay police enough that they can't be bribed- certainly, two to three times as much as the average taxpayer makes. But the value of the police against drugs is zero for us, and immense for the criminal rackets who depend on drugs being illegal to keep them in business.

For the police, it's a win-win-win scenario. A wealthy alternative employer is created to bid for their services, and hey, why not work for both at the same time. Given their huge financial stake in the outcome, they shouldn't be allowed to take part in the discussion at all. If there's anything to be learned from their statistics, that can be learned by independent scholars.

Mutu attempts to move Liddy....to be continued.....
Posted by serial catowner at 7:44 AM No comments:

The US has a GDP of *about* $15 trillion. If we were to end the drug wars ($50 billion) and cut the actual war spending (over $600 billion) in half, and reduce our national health care bill from about 15% of our GDP to about 10% of our GDP by socializing medicine, a la France or Germany, we would have about $1 trillion in hand annually for investment in renewable energy, urban renewal, and electric transit- about 8% of our GDP.

And this is an amount we are already spending annually on stuff of no value. The only downside here is the emotional immaturity of the American people. If we kept spending the money, but on valuable stuff, the people who were making bombs could find jobs making windmills. The products may be rocket science, but the economics aren't.

And even this would not be full employment, or the most good stuff we could produce. Women, people of color, and the elderly are unemployed and under-employed. The potential expansion of our economy if people could just work as much as they want to work is almost unimaginable- to us.

Don't believe me? Do your own research and check it out. And then start trying to think of ways you can be part of the solution instead of part of the problem.
Posted by serial catowner at 1:40 PM No comments:

No "Regime Change" For Me, Thank You

When it comes to Iran, the word is all "regime change".

Are we effing nuts? Iran is like 70 million people who have elections and throw the bums out. IOW, the only functional democracy between the Phillipines and Turkey. You want to exchange that for a dictator, like in Pakistan, or Saudi Arabia, or Egypt? Getting nervous about that democracy idea?

Our postwar policy of coups, assassinations, and military aid has filled the world with unstable dictatorships and weapons. Adding Iran to the list won't solve anything.
Posted by serial catowner at 6:13 AM No comments:

Liddy (r) is trying to make Mutu jump down from the high shelf.....
Posted by serial catowner at 12:32 PM No comments:

It's the third hot day in a row, about 90. My mail server has failed, the voice mail at the ISP has failed (maybe the whole PBX), and the internet servers and connectivity are failing fast.

And some people think a temperature change of a few degrees isn't going to matter much. Wake up! Smell the coffee!

It's going to matter a lot.
Posted by serial catowner at 12:21 PM No comments:

Honestly, you really can't make this stuff up.
Posted by serial catowner at 11:59 AM No comments: 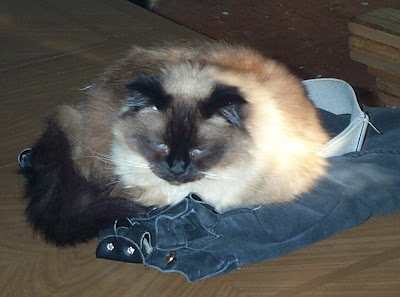 Posted by serial catowner at 5:14 PM No comments: